In the race to get smaller and more portable in the audiophile world, some things may get lost along the way. How we listen to music, check out podcasts while we’re at work, or have something to distract us when we exercise has many on a constant search for the best hybrid of sound quality and convenience. With the rise in popularity of earbuds, Beats-style headsets, Airpods, and bluetooth headphones, the odds would be pretty high for something other than those mentioned already to be reccomended or be on any shopper’s radar. But just like Han Solo, never tell 1More the odds when it concerns what they’re doing with their Quad Driver In-Ear Headphones (1More, MSRP $199.99, you can buy it HERE) because they balance the playing field and then some where it counts.

The headphones themselves consist of a 1.25 meter (little over 4 foot) durable Kevlar cable with aluminum-based earpieces fitted at a 45 degree angle. A remote with basic volume, track, and microphone controls is provided and attached to the upper part of the headphone’s construction. This might already be intimidating for some, but hold on because even though it takes many back to a corded experience, the allure of what makes these so special might just have those interested convinced once they try them out. Yes, the 1More’s are a bit pricy for a corded option but having it tested out in noisy outdoor, crowded indoor, and quiet office settings, the main draw for this particular audio piece stood out in any situation presented to it.

Before the urge hits to put back on those earpods (even our much-beloved HELM Audio ones), the sound that pumps through those Carbon drivers is truly remarkable. A hi-fidelity experience that is so much beloved that THX gave them their first-ever seal of approval. The notification that the 1More Quad Drivers were the first headphones to pass THX certification reaffirms what is already clear to this reviewer any time the music or video gets played into the device. With a rich, energistic ambiance capped off with a distinct and ample devotion to both bass and treble, the Quad Drivers deliver a fantastic sound which compares favorably to some of the better experiences had with much more expensive over-the-air headphones. If there are some still questioning (or maybe bemoaning) this corded option there is an alternative now provided by 1More that can make the Quad Drivers a much more palpable option.

1More recently dropped their Hi-Definition Bluetooth Adapter (1More, MSRP $29.99 buy it HERE), that will allow normally corded options with a 3.5 mm plug in to get the advantage of having no longer a devoted connection to a phone or other main device. Coming in at an almost discrete and miniscule eleven and half grams, this tiny but much needed apparatus provides the proverbial bluetooth 5 bridge that will allow for a freedom of movement from up to ten meters away. It holds up to an eight hour charge, convenient built-in clip, and one button control operation. 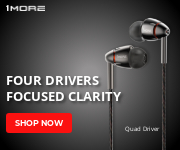 The very good about this adapter is that not much gets lost in audio translation, whether it’s the Quad Drivers themselves (which you can find bundled together for sale on Amazon) or another corded earphone option. Compared to other adapters, the eight hour battery life and limited response from the sole button may be somewhat disappointing, but if there are already control features on what’s being connected it shouldn’t be of too much concern. Plus the very small size of the 1More adapter may be a better trade off than bulkier units with a longer charge.

Having put both the 1More Quad Driver In-Ear Headphones and the 1More Bluetooth Adapter to the test, the feeling gained is one of reassurance. Yes, there is a little bit more when having a corded option for your listening options, or even pairing it up with a bluetooth device. But if anyone out there reading is undeterred by this and interested in adding a much improved sound quality to their busy lives which regular earpods or bluetooth headphones may not give, the 1More Quad Driver (and for that matter 1More Bluetooth Adapter) just may be the old-school answer option they’ve been searching for. 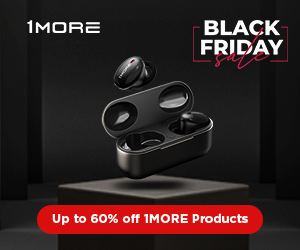