From Nero to Hero: Devil May Cry 4: Special Edition (Review)

Played on: Xbox One

When it comes to third person action games, it’s hard to imagine the genre without everybody’s favorite demon slayer. No, I’m not talking about Bayoneta or any of the Belmonts from Castlevania. I’m talking about a certain white haired, large sword wielding, nephelim named Dante. Since 2001, Dante has been battling the forces of evil with his trademark sword, Rebellion, his trusted side arms Ebony and Ivory, and his sometimes cringe-worthy wit to rid the world of creatures who want him dead because of his heritage. And for three whole games – four if you’re counting Ninja Theory’s reboot back in 2013 – Dante has been victorious in his war, much like the action heroes of every classic ’80s film. Then, in 2008, director Hideaki Itsuno did something out of character for the series, he introduced a new protagonist who is nothing like Dante, but at the same time almost exactly like Dante, and his name is Nero.

Devil May Cry 4 was released back in 2008, so chances are, if you’re a fan of the series, you’ve played this game in some form. The version that this review is based on is the special edition that was released back in 2015, just a few months after Ninja Theory’s DmC: Devil May Cry was released, a game that was meant to reboot the original series, but might disappear entirely if the current rumors of a Devil May Cry 5 currently in the works at Capcom have any validity. While this game does feature Dante, he isn’t the main protagonist. In Devil May Cry 4 you play as Nero, a young man who lives in the town of Fortuna, which resides on an island isolated from the rest of the world. On this island is a religious cult called the Order of the Sword, who worship Dante’s father, Sparda as their god.

Not a lot is revealed about Nero’s parentage. What we do find out over the course of the game is that he was discovered on the island as a baby and raised by Credo, the Captain of the Holy Knights, who teaches Nero to fight demons. It becomes very clear early on in the game that Nero has absolutely no faith in their god, but he does believe in protecting the innocent, especially if among the innocent is Credo’s younger sister Kyrie, who Nero clearly has feelings for. It isn’t until Dante crashes through the ceiling of their church and “assassinates” their holy leader that Nero discovers just how different he is from everybody else. He confronts Dante and awakens a latent demonic power in him that transforms his entire arm. Between his arm and snow white hair, Dante sees that there’s something different about him, and after a couple of fights, begins to help Nero along on his journey instead of hindering him. 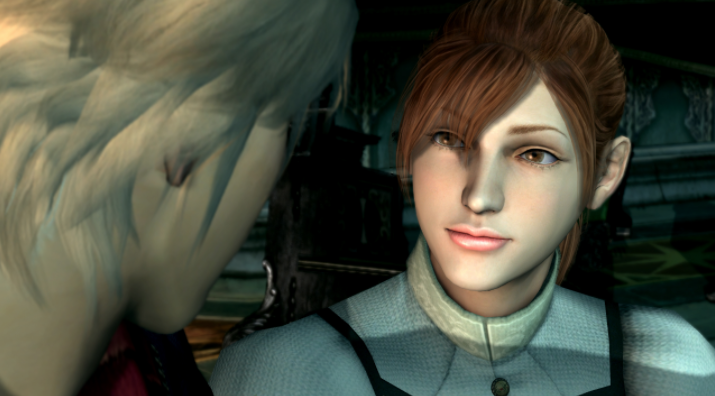 As for the rest of the plot, I’ll give you the abridged version. As it turns out, the Order of the Sword doesn’t just worship a demon, they’re trying to harness demonic power so that they can become demons, and stage the second coming of Sparda in order to eliminate non-believers and give their leader more power over his congregation. Sounds familiar, right? How do they go about this? Through opening hell gates all over the city, allowing an army of demons to come through, and then making it look like “The Savior” which is a giant colossus made in Sparda’s image, destroy them. It takes hero worship to an entirely new level. I won’t go into any more detail, because you should definitely play this game, but you can expect appearances from classic Devil May Cry characters like Trish and Lady, and even add on content featuring Dante’s brother, Virgil.

When it comes to Devil May Cry games, it’s difficult to not enjoy them. Yes, because of the style of the game and the dialogue, you might play it mindlessly and not pay any attention to the story until you reach the end of the game, but even that speaks leagues about what a great job the game does at grabbing your attention. Even still, the story in this series has never been the easiest to follow, but with a new protagonist who actually has something at stake, I found myself enthralled not just with the gameplay, but with the story, as well. As much as I love Dante, with the type of character he is and the way his dialogue is presented, you never really get the depth you’d expect from a character like that. After all, it’s hard to sympathize with somebody who is seemingly invincible. While Nero – assuming his lineage is anything like Dante’s – might also be seemingly invincible, the lack of detail given about his back story, makes him feel just a little more human, and thus, easier to latch on to.

Let’s talk about the gameplay. People always complain that the first three entries into the series were way too easy. I didn’t think that, but I never play games as a way of challenging my skill. In Devil May Cry 4, they definitely took the difficulty up a few levels, as well as throw some puzzles in that took a little mental sweat to solve. The upgrade system isn’t anything special. It’s just fine. The only problem is that the skills you need and the items you might want often take more currency than the game gives you an opportunity to collect. Why do they do this? I’ll get to that in a moment. Unlike most action games, they don’t overwhelm you with combo-oriented upgrades. Remembering the order of buttons to press to do certain things has always been a short-coming of this genre, but in Devil May Cry 4, they make it just simple enough to allow you to have fun with it, without having to pause the game and go to the menu to see your combo list.

As for my earlier comments about the in-game currency, it seems like this a feature meant to make you want to go through multiple playthroughs. And while the game isn’t overwhelmingly long, by the time you play through the stories of each of the available characters, you might need a break from the game before attempting to level up all of your skills. Does it have replayability? Heck yes it does. Is it fun enough to place at the top of the list of games you want to play again? Maybe. Is it worth investing more than sixty hours into? I don’t think so, but everybody has a different opinion on what makes a game grind-worthy. My last honorable mention is that while Nero’s dialogue is sometimes cringey, he’s a welcomed remnant of a time when flawed heroes made the pulp-fiction genre of storytelling both exciting and relatable.

As for the bad, besides the places where they chose snark and sarcasm over meaningful dialogue and story-development (which is typical of this series) my only real complaint is the camera angles. I know this a complaint of video games that involve some degree of exploring, and Brank from Super BS loves the mini game that is camera manipulation, but this system is deeply flawed. For example, there’s a lot of corridor exploration in this game. You might go from a more open area and then zone into a narrow area, and because of the angle of this area in relation to screen, they’ll invert the directional pad, so when the area loads, you’ll end up going right back where you came from. Because of this, I took my fingers off the controller completely any time it needed to load a new area.

One more complaint is that – as is often the case with this series – the story is somewhat incoherent. By the time the game ends, you don’t really mind that it didn’t make the most sense, but it would be nice to have a full experience in a Devil May Cry game for once, and not one that ends in a way that makes it feel like they were making it up as they went along.

Like I mentioned above, it’s really difficult to not like this series. Despite its camera flaws, I didn’t once turn it off out of frustration. I’ve always loved these games and the potential their narrative has. Will they ever fully tap into that potential? Who knows? Will I keep playing to find out? Of course. I did play this game the first time it was released back in 2008, but I found that going back to it after the release of the special edition made the game feel new again. I loved Ninja Theory’s reboot of the franchise, but I always wanted to know what happened to Nero and if we’d be seeing him again. Because of that, I hope that there’s another entry in this series before we see a sequel to the reboot. If you’re a fan of fast-paced action games, a little bit of horror, and rock and roll, than Devil May Cry 4 is the game for you. On a side note, you don’t have to play the previous games to understand this one. They do a pretty great job of explaining who everybody is and what’s motivating them. I give this game a nine out of ten.